There are two things trending in the Bowers’ household right now:

As I’m finding out, making changes in our lives for purposes of one of these things actually helps the other as well. I love multi-tasking.

One example of this is making our own Greek yogurt cups with fruit on the bottom. We love Greek yogurt for its taste and its health benefits. But darn it: those little cups of it are quite pricey. At best, we can find them for $1 each when they are on sale. And while Greek yogurt is good for the body in many ways, I’m not sold on the health benefits of the “fruit” on the bottom of these little containers. Plus, that’s a lot of waste for just a little bit of food. Something clicked when I saw a picture of a yogurt parfait in our gym’s monthly newsletter: it would be so easy to make our own fruit on the bottom yogurts! The health and environmental benefits were obvious…and I had a sneaky feeling there would be a financial advantage too.

The whole process was surprisingly very easy. I got 12 of these 4 oz. jelly jars from Wal-Mart: 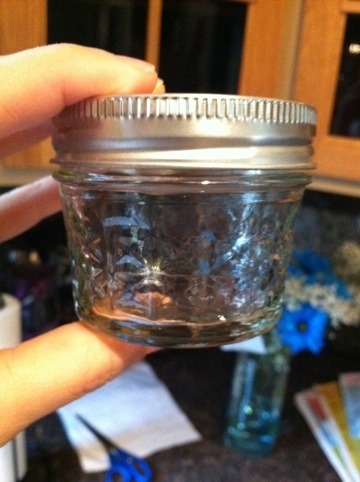 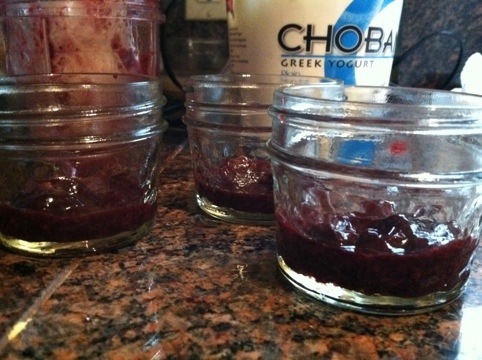 I then topped it off with about 3.5 ounces of the Greek yogurt (about a half of a cup). The result: homemade, healthy cuteness: 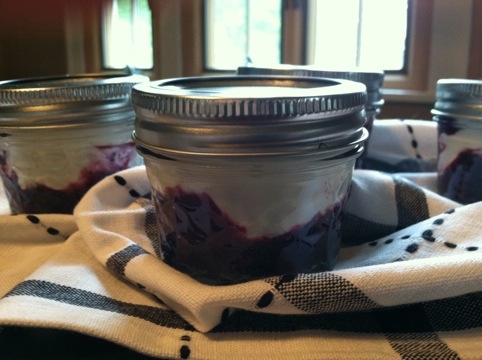 And what were the financial results of all this? The total cost of each jar of yogurt was $1.51, BUT that includes the cost of the jar, a one time investment. Not including the $.70 per jar, the cost of each was $0.81, about $0.44 lower than the national average price of $1.25 per container for the above-mentioned disposable cups. The store-bought containers do have a size advantage though: they hold 5.2 ounces compared to 4 ounces in the glass jars. However, that equates to about $0.24 per ounce for store-bought, versus $0.20 per ounce for homemade. Small difference, but depending on how many your household goes through a year, that could equal big savings.

So, which is better? Homemade, lower cost, eco-friendly yogurt cups (of which I know all the ingredients), or the convenience of brand-name cups with a bigger variety of  mystery “fruit” from the supermarket? In my opinion, the easy winner of this smack-down is the homemade version. My taste buds agree!

“In this world, nothing is certain but death and taxes.” – Benjamin Franklin

True. But I can say, as a tax accountant, there is one other certainty near and dear to my heart: the end of tax season. Even though individual returns are due today, I still have a few days left of my corporate tax work. I’ve been looking forward to this week since the first week in January, so to celebrate, I want to share some fun facts about taxes with you (yes, I said the words “fun” and “taxes” in the same sentence):

1. In 2009, the IRS received 131,543,000 individual tax returns (source). If one person processed one return per minute, it would take that person 250 years to process that many returns. Now THAT’S what I call over-time.

2. There are over 7 million words in the tax code and regulations. That’s more words than the Gettysburg’s Address, the Declaration of Independence and the Holy Bible combined (269 +1,337 + 773,000). Anyone want to double-check my count?

3. Celebrities might make a lot of money, but they are often caught trying to hide it from Uncle Sam. Below are some of the most famous celebrity tax troubles (along with the bill received from the IRS):

4. Are tax accountants smarter than Albert Einstein? He sure thinks so: one of the smartest men who ever lived once said “The hardest thing in the world to understand is the income tax.” (source)

5. Before 1897, there was no SSN requirement for dependants. All you needed was a name, so many people claimed pets, other people’s children or fictional children as dependants. Someone in the IRS knew what they were doing: after the SSN requirement was enacted in 1987, 7 million dependants vanished from tax returns.

And lastly, I have two requests:

2. Most importantly, please give your favorite tax accountant(s) a text, call or hug today. We’ll need it!

Since we upgraded our kitchen recently, I’ve been looking for fun accessories to add some “punch”. I saw this fruit bowl and needed to have it: 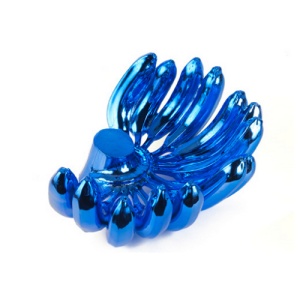 So, plan B: either find a less expensive one or make one myself. I found plenty of chrome fruit bowls, but none like the $140 one. Therefore, it was time to get crafty. I got some tips off of the internet and headed to Michael’s. There I picked up 5 plastic bananas: 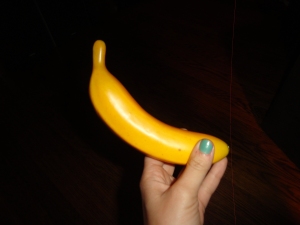 Back at home, I used a hot glue gun to form the bananas into a bowl shape: 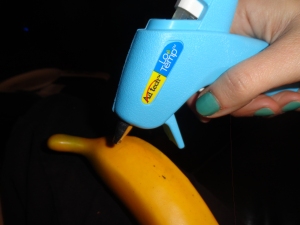 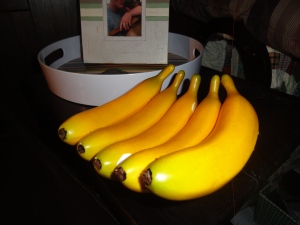 Using a metallic silver spray paint, I put two coats on the bananas, making sure to get in all the ridges and to let each coat dry completely. I repeated the process for the bottom.

Ta-da! My own “chrome” fruit bowl: 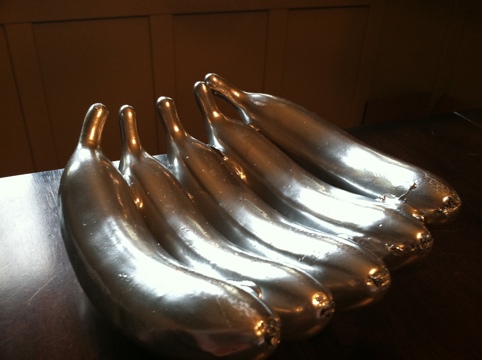 I am so happy with how this turned out. And best of all: it was so inexpensive to make. I had the hot glue gun and spray paint, so the only cost was the bananas. At 1.75 each, the five pieces of plastic fruit cost under $10. I’m even more in love with this bowl!

There are many things I love about fall (football games, the weather and boots, to name a few), but there is one thing that I consider to be the quintessential element to the perfect fall: pumpkin. Whether they’re being used as decoration or as the scene-stealing ingredient in food and beverages, pumpkins announce that the most colorful (and, in my opinion, the most wonderful) season of the year is in full swing.

Every year, I gleefully purchase a half-dozen cans of pumpkin, dreaming all the way home about my big plans to make pies, cookies and other pumkin-y delights. And every year, I maybe use one or two of these cans because, you know, even the best made plans can fray when life gets too busy (or I remind myself that I just don’t have it in me to make a pumpkin pie). As a result, I have a small stockpile of cans of pumpkin, a few of which expire and are thrown away every year. Since I resolved in 2012 to stop being so wasteful, I decided to finally use these cans of pumpkin. And why not use them in late winter / early spring? I love the flavor of pumpkin, any time of year.

I hope you enjoy these recipes as much as my husband and I did, and I really hope that you get as excited as I did when I realized that pumpkin can be eaten every meal of the day (including breakfast) and used in much more than desserts.

1. Start your day off right with pumpkin oatmeal. De-lish.

4. And finally, a Bowers original: one-step pumpkin cream cheese schmear. I think this rivals Einstein Bagel’s version (but I might be biased). 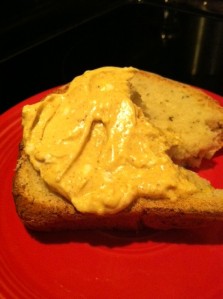 1. Combine all ingredients in a medium bowl and whip until cream cheese is smooth and free of lumps.

2. Optional – put on toasted bagel or crusty bread. Eating straight from the bowl is also acceptable.

My original intentions were to get this posted before Easter…but this last week got away from me. Oops! Guess I’ll have to settle for a post-Easter pre-Easter post.

Sunday marked the day my mom, sister and I picked for our annual Easter egg coloring get-together. Every year, we get together with the men in our lives to eat some good food and decorate for our favorite Spring holiday. We always come up with creative ideas, and this year was no exception:

This year, we used double-sided sticky dots and glitter to add some sparkle. We also took a tip from Martha Stewart and wrapped some eggs in thread. Thanks to a suggestion from my mom, we used pieces of a sponge to make a super cool camo effect.

Since we have a little cutie pie on our hands, the day wouldn’t have been complete without an Easter egg hunt.

Hope everyone had a great Easter!

Easter is one of my favorite holidays: it means that spring is here (or at least getting close), that it’s time to color Easter eggs and that our Lord is risen! This weekend I got to celebrate a little bit of everything Easter has to offer. Because there is a lot to share, I will split it into two posts: Saturday and Sunday.

First, Saturday. I spent a couple of hours Saturday morning with a group from my church preparing for the Easter Vigil Mass next Saturday. It was definitely a great and inspiring way to kick off a weekend I’d been looking forward to for a while. Then, Ryan and I went on a middle-of-the-day-date: an adult Easter egg hunt at a local winery. This was the first year we did it, and we’ll definitely be going again next year! For $7 a person, we strolled around the beautiful winery and hunted for plastic eggs, while sipping on a glass of wine. Each plastic egg had a piece of candy and, if we were lucky, a coupon to a local business or a prize from the winery. While we didn’t win the grand prize of wine gift basket, we did get a couple of coupon’s to a local sandwich shop and a free T-shirt from the winery.

After we picked out the T-shirt (I picked an AMAZINGLY soft long sleeve T-shirt), we headed to lunch to use our sandwich coupons. I’m so glad we did: we had never heard of Shisler’s Cheese House in Copley, but we’ll definitely be back. The food at their deli is fresh and dee-lish, and their wine and grocery store has a ton of choices you cannot find at chain stores. Definitely a successful afternoon!

After that, we headed home to talk Sarge for a walk and get ready for a night out with one of my best friends from elementary/middle/high school and her husband: Katielynn and Trey Wallace. We share a love of the folk/bluegrass singer Alison Krauss. We got to see her last fall in Warren and again Saturday night when she came to Cleveland (yay!). After a fun and yummy dinner at Bricco in downtown Cleveland, we enjoyed a fabulous concert at Playhouse Square.

I went to bed with a huge smile on my face…reflecting on a perfect Saturday and looking forward to what I had planned for Sunday.

Hi all! I'm Whitney: born and bred in Ohio and very proud of it. My blog is about my life with my husband, Ryan, our sons, JJ and Pookie, and all the other people, places and things I love. Thank you for visiting "True Whit"! 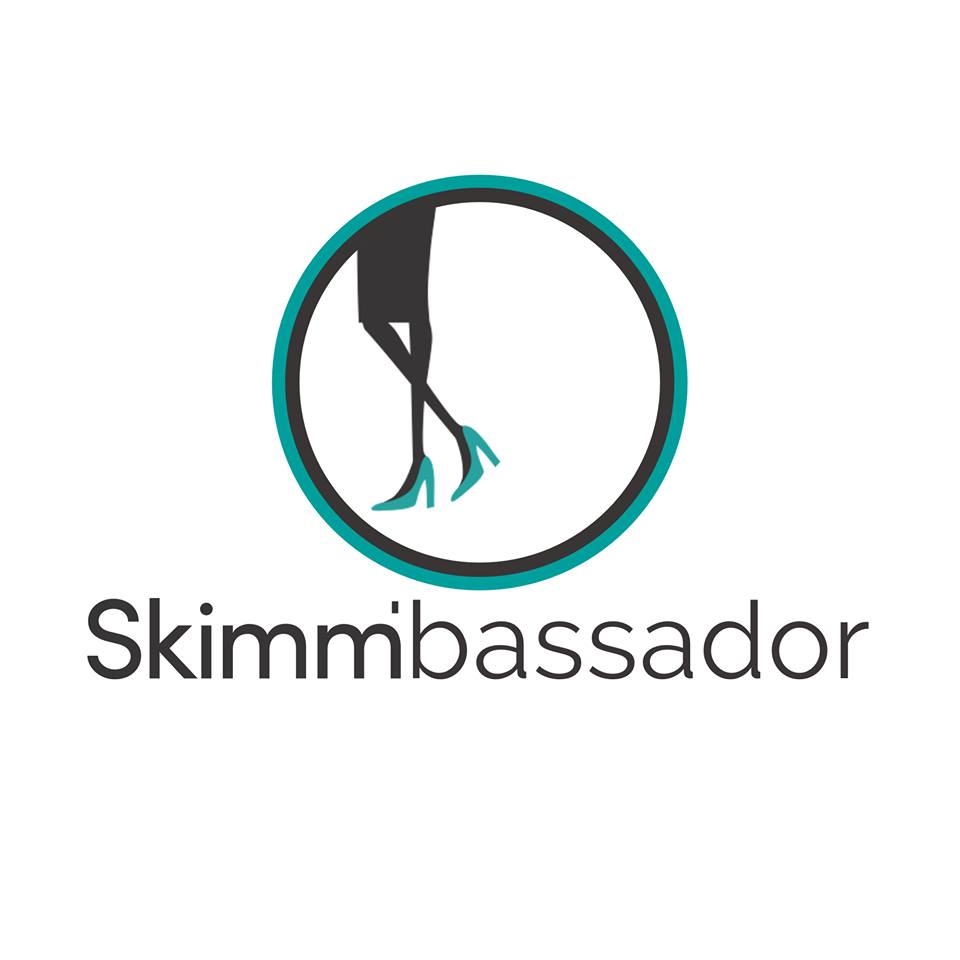 There was an error retrieving images from Instagram. An attempt will be remade in a few minutes.

I also have a blog dedicated to my attempts at photography. If you'd like to check out the pictures: http://harbophotography.wordpress.com